Ostad Elahi at The Met

The Metropolitan Museum of Art in New York is home to one of the world’s most diverse and significant collections of musical instruments. Comprising over 5,000 instruments from six different continents, it is unsurpassed in scope and includes examples from nearly every culture and era.

Following the conclusion of “The Sacred Lute: The Art of Ostad Elahi” exhibition in January 2015, the musical galleries of the Met were closed for extensive renovations. These galleries formerly consisted of two large, parallel wings that were separated into eastern and western musical traditions, along with a few smaller exhibition spaces on either end of the rectangular-shaped galleries.

Gallery 684: The Art of Music through Time

In March 2018, coinciding with the advent of spring, the first of these galleries officially reopened to the public. Gallery 684, “The Art of Music through Time,” is organized chronologically around the central theme that the creation of music and instruments has occurred hand in hand for millennia, thus highlighting the underlying commonalities in the creation and function of the instruments on display. The gallery also features related objects and paintings that illustrate the universal presence of music and instruments throughout art and society. 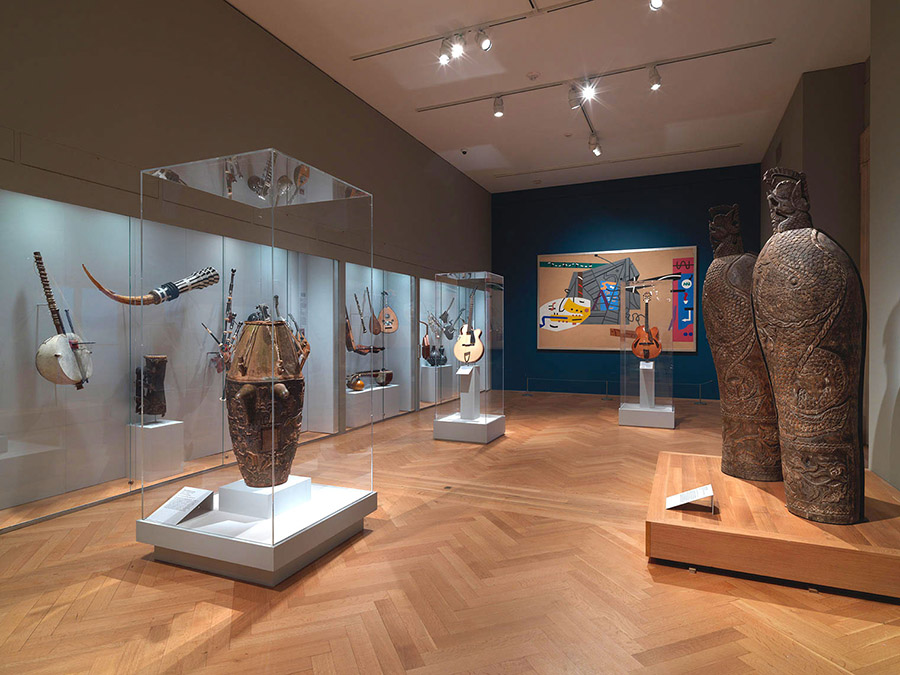 Located within Gallery 684 is a showcase entitled “Famous Musicians,” dedicated to some of the most influential musicians of the twentieth century, especially those who had a profound impact on the structure and design of their instrument to elicit the sound they desired. Among the instruments of the six musicians featured in this showcase is the tanbur of Ostad Elahi. This particular tanbur is significant in two respects: first, it was built by master luthier Nariman according to Ostad’s exact specifications, and second, the majority of the recordings that remain of Ostad’s music today were played with this tanbur.

Complementing the presence of the tanbur in this showcase is a short video on an adjacent monitor introducing the life and music of Ostad Elahi. 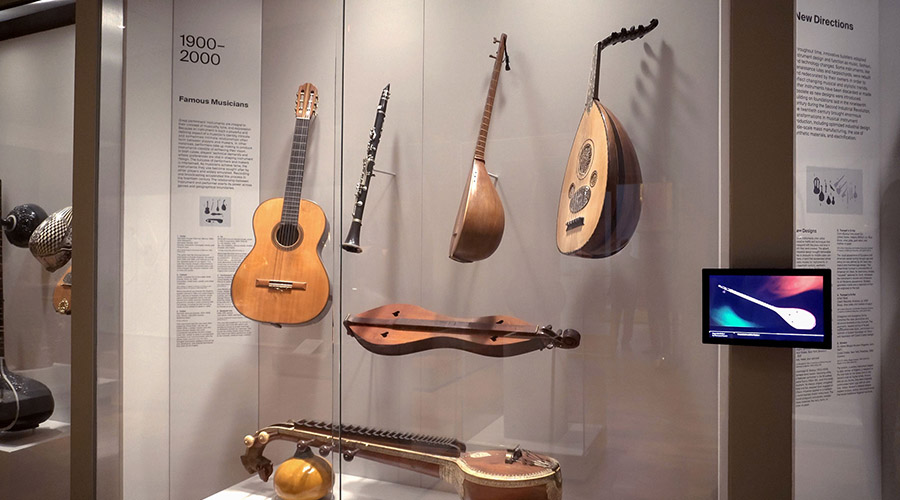 To celebrate the inauguration of Ostad Elahi’s tanbur within the permanent collection of the Met, the Department of Musical Instruments and the Nour Foundation co-hosted a special private reception and musical performance at the Patrons Lounge on April 7, 2018. The program included remarks by the Met curatorial staff, which expressed its gratitude for the inclusion of this singular instrument within the newly renovated galleries, as well as a musical performance that was centered on the tanbur. 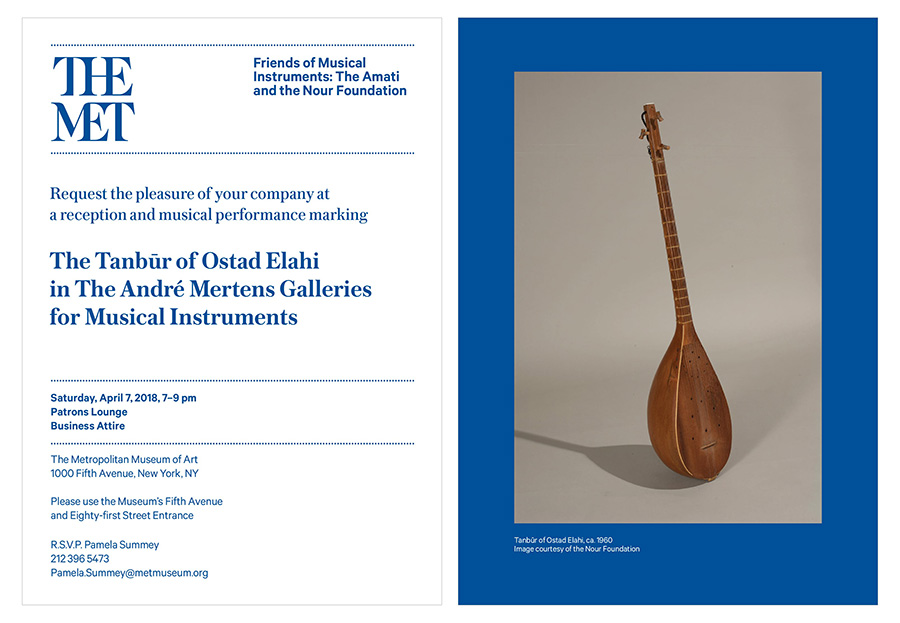 Gallery 681: Mapping the Art of Music

Almost one year later, the remaining musical galleries were reopened in February of 2019, including Gallery 681, “Mapping the Art of Music.” Featuring a new concert space, this gallery explores the impact of geography, trade, and migration on shaping music and the instruments used to produce it, while highlighting the intersection of cultures and instruments along important conduits such as the Silk Road. Many of the instruments in the galleries can now be heard through dynamic kiosks and a musical audio guide, including a sample of Ostad’s Qatār Suite.

Prominently on display within Gallery 681 is a striking showcase dedicated to four of Ostad Elahi’s prized instruments: a rare five-stringed tanbur invented by Ostad to synthesize the tanbur’s sacred repertoire with that of classical Persian music; a flat-backed setar designed for travel; a choghur from the south of Azerbaijan that Ostad was quite fond of playing in his own unique style; and a daf or frame drum dating to 1915 that Ostad also used to play in his own special way. 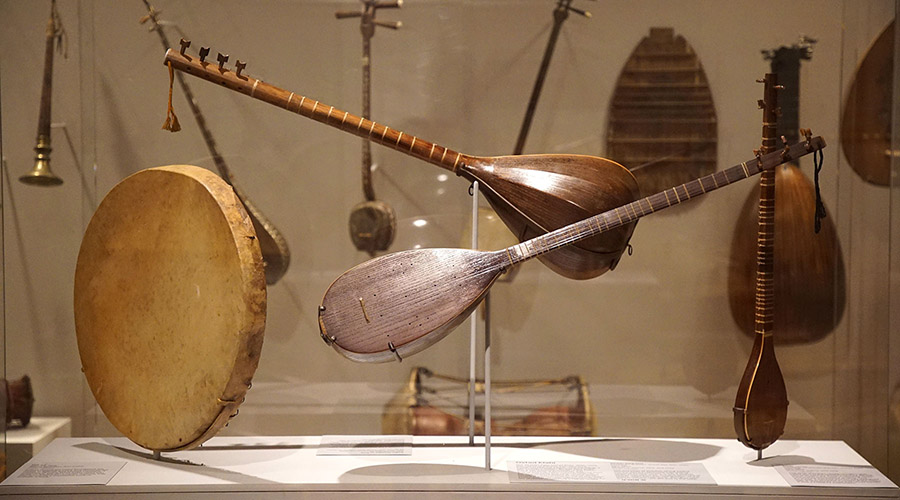 Located to the side of Ostad’s showcase is a video monitor featuring several instruments in the gallery being played at different locations throughout the Met. This video includes a tanbur rendition by Dr. Chahrokh Elahi that was recorded inside the Sacred Lute exhibition back in 2014.

To celebrate the addition of Ostad Elahi’s five instruments on display in the Met’s permanent collection, MetLiveArts presented a special two-day event featuring a musical concert, a debut documentary film screening, and a panel discussion on the musical art of Ostad Elahi.

On April 5, 2019, “The Musical Legacy of Ostad Elahi” took place at the Met’s Grace Rainey Rogers Auditorium. The sold-out program featured opening remarks by Ken Moore, Curator Emeritus of the Department of Musical Instruments, and Dr. Ebby Elahi, Ostad Elahi’s grandson, who provided a demonstration of some of the major innovations that Ostad Elahi introduced to the structure and playing style of the tanbur. The program also included a rare performance by Dr. Chahrokh Elahi, Ostad Elahi’s youngest son and the legatee of his musical art, whose intricate hand movements were magnified on the large screen behind him. 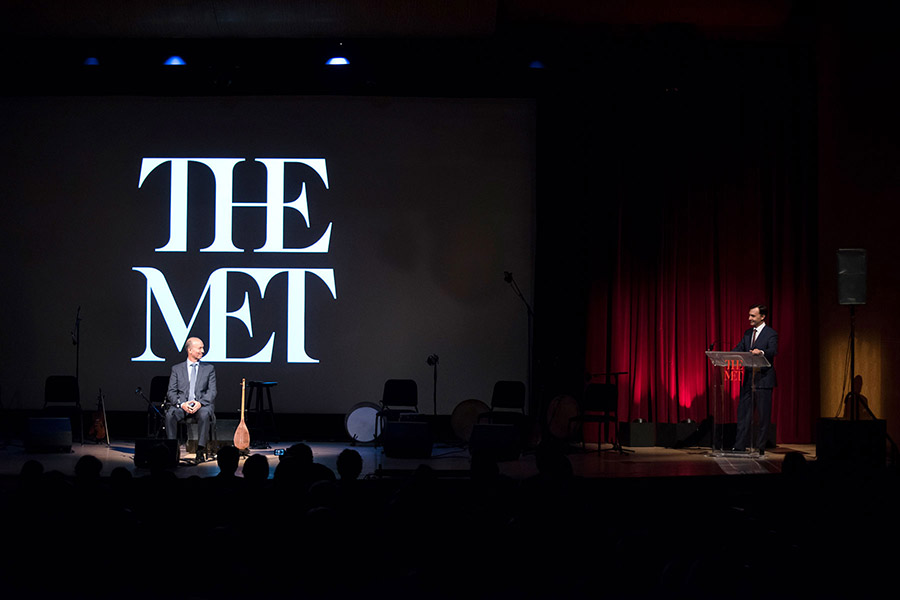 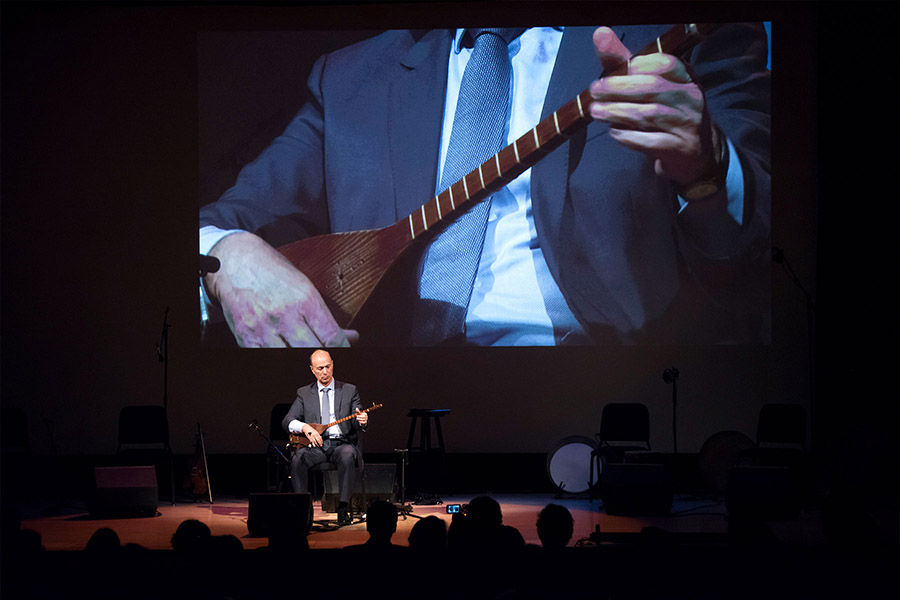 The evening concluded with the Garcia-Fons Ensemble, led by renowned double bassist Renaud Garcia-Fons. The Ensemble, which featured eastern and western instruments alike, performed a series of novel arrangements and compositions directly inspired by the musical repertoire of Ostad Elahi. 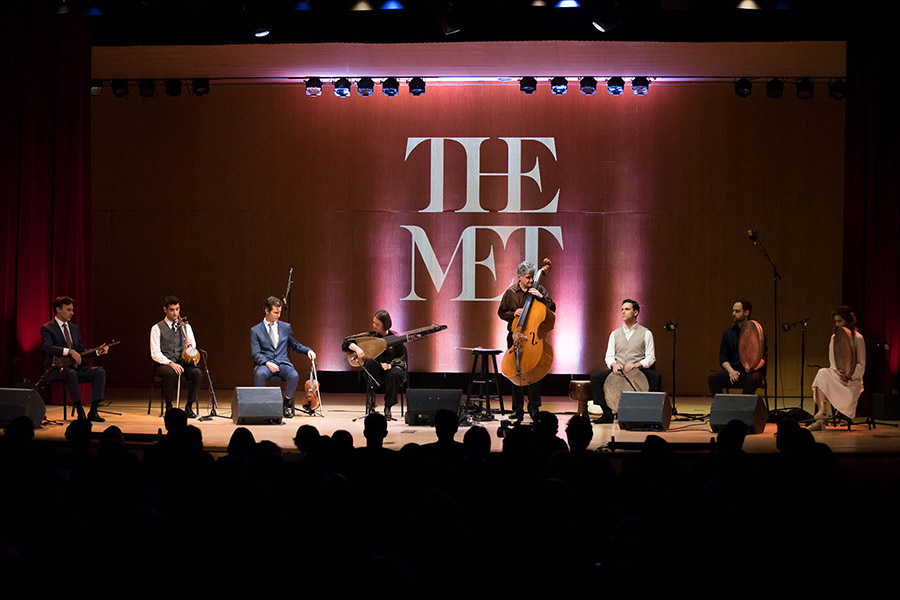 On April 6, 2019, “The Musical Art of Ostad Elahi” featured a film screening and panel discussion at the Grace Rainey Rogers Auditorium. Hosted by New York Public Radio’s John Schaefer,  the sold-out event began with a debut documentary film screening on the life and music of Ostad Elahi. The film screening was followed by a panel discussion with Leili Anvar, Professor of Persian Language and Literature; Daniel Levitin, neuroscientist, musician, and bestselling author; and Theodore Levin, Arthur R. Virgin Professor of Music at Dartmouth College. Moderated by John Schaefer, the panel engaged in a lively and insightful discussion on the origin, evolution, and impact of Ostad Elahi’s musical art. 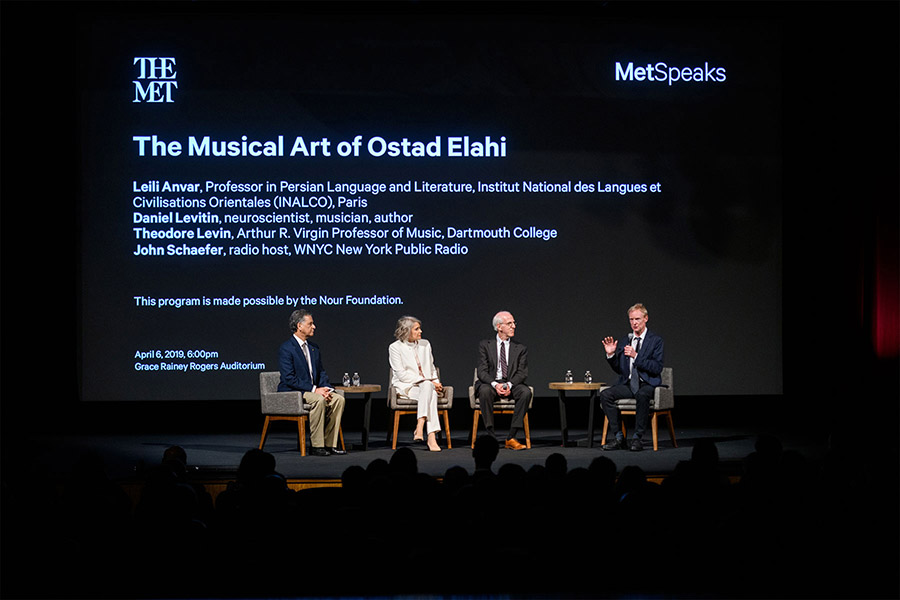 These special events were complemented by the Met’s timely release of a commemorative box set featuring two new CDs of Ostad Elahi’s music, the 13th and 14th in the existing Le Chant du Monde collection. These recordings offer a rare glimpse into Ostad’s diverse repertoire, masterful improvisations, and unparalleled technique, while inviting listeners to rejoin the intimate and privileged environment in which these pieces were originally rendered.

Ostad, in his characteristic humility, would always say that everything about him was quite ordinary, everything, that is, except for his tanbur. Now, nearly fifty years after his passing, his extraordinary musical art is finally on display for everyone to behold and ponder in one of the greatest collections of musical instruments at the Met.