After his spiritual transformation and the completion of 12 consecutive years of ascetic retreat and fasting, at the age of 21 Ostad Elahi was by all accounts a sage and a peerless musician. During the entire period of his ascetic retreat he had not experienced what it was like to live outside of one’s home, becoming accustomed instead to living in the Eden of his father’s abode, with its spiritual atmosphere and lack of material attractions. At the end of this period of asceticism, he remained in that same house for some time and continued his mystical lifestyle, unaware of what was transpiring in the outside world. It was this same innocence that later made things somewhat difficult for him in society.

I had spent my entire life within the same four walls, and nothing but divine words had reached my ears. I had no form of interaction with society . . . and no knowledge of people’s lives and thoughts. I could not believe that someone would lie or cheat; I thought that everywhere else was like our own home.

Despite the fact that no exact records of this period are available, existing works and various accounts corroborate that prior to accepting a governmental post, Ostad Elahi maintained his father’s mystical lifestyle in that he kept his hair long, dressed in the white robes of dervishes, and adhered to a tradition he had become fond of since the age of six. It was during this same period that an astute jeweler in the bazaars of Tehran observed Ostad Elahi’s noble and charismatic personality, leading him to earnestly ask Ostad to teach him the secrets of alchemy.

The first year I traveled to Tehran I was 25 years old and lived in an area called Sangelaj. During the day, I would occasionally pass by the bazaar. My state of detachment toward everything had caught the attention of one of the jewelers there and led him to believe that I was in possession of alchemy. One day, he greeted me warmly and invited me into his shop; when he learned I was fasting his curiosity was piqued even more. A few days later, he once again invited me into his shop and said: ‘Sir, won’t you grant me a share?’—he was referring to alchemy. His reasoning was as follows: ‘Your detachment and nobility compel me to believe that you are in possession of the philosopher’s stone.’ He was quite persistent, so one day I finally said to him: ‘I will reveal the secret of alchemy to you on one condition.’ He became quite happy and said: ‘Any condition you set, I will accept wholeheartedly.’ I said the condition is this: ‘That you truly renounce anything your ego desires. After a while I will test you, and if you are able to fulfill this condition I will reveal the secret of alchemy to you.’ He thought for a moment and replied, ‘But sir, if I renounce my desires, why would I want alchemy?’ I then counseled him and explained that what others say is deceptive: ‘The key to true alchemy lies in the hands of the Lord, and He only grants it to those who will not use it.’ When a person becomes detached and seeks nothing but divine contentment, he will have everything, for God does not begrudge anyone and gives each person what is good for him.

The photograph in which I am wearing a turban dates back to when I was entering my 26th year. I was immersed in an angelic world, constantly in a state of fasting and eating only one light meal at sunset every 24 hours to break my fast.

When I look at photographs of my youth, a special feeling overcomes me as I recall my state of mind and spiritual exaltation. The world and everything in it meant nothing to me. 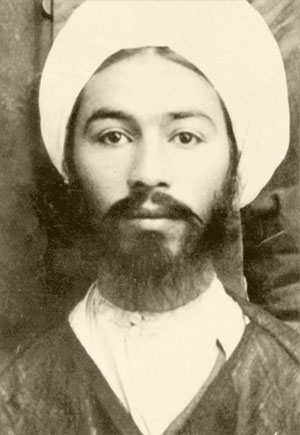 Hadj Nematollah’s teaching method prioritized his son’s spiritual training and did not leave much time for his conventional education. However, the works that remain from Ostad Elahi’s childhood and youth reveal that he had good penmanship and literary skills (especially in poetry), and a sufficient command of theology, philosophy, and religious history. Prior to the passing of his father in 1920, the young Nur Ali often spent his time transcribing his father’s works. Ostad recalls that toward the end of his father’s life, Hadj Nematollah recited The Book of the Kings of Truth in 40 consecutive days as he rapidly transcribed his father’s words. During this time, the depth of his knowledge about the fundamentals of spirituality is clearly evident. It was this same aptitude and perseverance that would later help him to successfully complete the three-year judicial curriculum in only six months, notwithstanding his lack of a formal education.

On the basis of his father’s recommendation Ostad Elahi married a few years before his father passed away, and his first child was born two days after Hadj Nematollah’s departure. After his father’s death, in addition to assuming responsibility for his mother, his two younger sisters, his wife and child, and his inherited lands, he spent most of his time engaged in contemplation as well as occasional ascetic retreats and fasting, writing, research, providing spiritual lessons and guidance to seekers, going on pilgrimages to the shrines of prominent Ahl-e Haqq saints, and compiling his father’s works, including writing commentaries on several of them. One of the most valuable works from this period is his novel and detailed account of creation, which according to Ostad Elahi was the product of a spiritual vision.

Within the first few days after Hadj Nematollah’s passing, all of his adherents viewed the departure of their leader as the end of the spiritual illumination that he had brought, dispersing and abandoning the young Nur Ali to himself. His father’s staunch opponents, who had been frustrated at their inability to pursue their material interests by taking advantage of the locals during Hadj Nematollah’s lifetime, sought to seize this opportunity and decided to eliminate Ostad to prevent him from becoming an obstacle like his father. Convinced that the divine will would come to pass, however, Ostad ignored their repeated threats and refused to flee. Indeed, it did not take long before the page turned in such a way that not only did Ostad’s adherents return and once again gather around him, but even his opponents who had failed in realizing their objective returned to express remorse for what they had done in an attempt to maintain appearances. Henceforth, his adherents and companions would once more benefit from his spiritual knowledge and wisdom, just as they had done during Hadj Nematollah’s time.