In 1957, after some 27 years of public service, Ostad Elahi elected to retire and settled in Tehran. The additional time afforded by his retirement gradually allowed more people to become more acquainted with him, and from then he devoted himself entirely to writing, teaching, and music. This period resulted in the publication of two seminal works, Borhan ol-Haqq (Demonstration of the Truth) (1963) and Marefat ol-Ruh (Knowing the Spirit) (1969), as well as a postscript on the meaning behind certain expressions and terminology contained in his father’s epic entitled Hashieh bar Haqq ol-Haqayeq (Commentary on the Book of the Kings of Truth) (1967). One of the other outcomes of this period were the informal gatherings with mostly family or friends in which he would often expound upon some ethical subject in response to a question or matter under discussion. Similarly, he would sometimes meet with scholars and Orientalists who hastened to visit him in search of truths about the East, answering their questions in simple, non-metaphorical language. Notes that were transcribed at these informal gatherings by a few individuals would later serve as the basis for the publication of two posthumous volumes entitled Asar ol-Haqq (Traces of Truth), which represent a collection of his oral teachings. 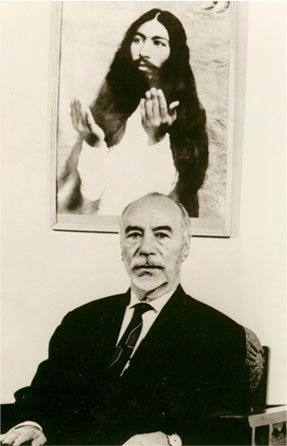 During this same period, his music resonated deeply with many people. In addition to their accounts of his remarkable skill, the profound effects of his music also began to spread by word of mouth, such that contrary to his personal wishes, his reputation as a master musician and spiritual sage gradually transcended his borders and drew various seekers and musicologists from all over to visit him. Their admiration and its ensuing recognition, however, never influenced his inner focus and serenity. Despite the praise of well-known musical masters, he shunned any pretense or fame, to the extent that he declined to perform in public or lecture about his philosophy. He would only guide those whom he deemed were genuinely seeking the truth. Up until the time he departed this world, he was engaged in spiritual practice and the realization of his inner alchemy, a lifelong project that would lead to his unification with the infinite ocean of the divine.

I no longer have any attachments here and am ready to answer His call.

The exceptional life of a person who from the age of five had been destined to assimilate a pure spirituality ended in this earthly abode on October 19, 1974, to be continued in dimensions in which he firmly believed. Ostad Elahi passed away quietly in his own home in Tehran at the age of 79. In accordance with allusions he had made in the past, his body was laid to rest in the town of Hashtgerd, where a simple memorial was erected at the site of his tomb.

Eight years later in 1982, in the midst of the mounting unrest and lawlessness of the early years of the Islamic Revolution in Iran, his perennial opponents deemed this to be the perfect occasion to fatally discredit Ostad’s teachings. Aligning themselves with certain factions within the government that were acting with impunity, they desecrated Ostad Elahi’s tomb with the goal of defiling his body. However, in accordance with one of Ostad’s own sayings—that the bodies of certain saints do not remain on earth—they found nothing but an empty wooden coffin and the shroud in which his body had been wrapped. This astonishing phenomenon, which could be considered among the wonders of high-ranking spiritual personalities, did not stir as much amazement for his students as it did for others. For those who had become familiar with his personality and school of thought, it was the realization of yet another of his spiritual concepts. After securing official authorization, another structure was erected on the same site two years later. Presently, Ostad Elahi’s memorial serves as a sanctuary for all those seeking a spiritual environment to engage in a heart to heart with their Beloved.